The State of Working Sonoma 2018

A Profile of Income and Racial Inequality, Poverty, and Low-Wage Employment

Despite the prolonged recovery from the 2007-2009 Great Recession, inequality in Sonoma County has soared, median household income has stagnated, and wages have fallen for the bottom 60 percent. The number of families in the county who are working poor has increased since 2005, and the crisis of affordable housing has deepened as renter wages and incomes have not kept pace with skyrocketing rents. 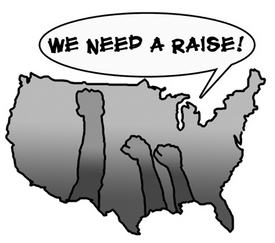 Highlights of the report include:

*One in four Sonoma County residents live in families receiving annual incomes of less than 200 percent of the federal poverty line or about $50,200 for a family of four;

*One in five county residents live in working poor families earning less than 200 percent of the federal poverty line with at least one member reporting income from work;

*Women, Latinos and other people of color experience the highest rates of poverty and disproportionately comprise the working poor;

*A living or self-sufficiency wage for Sonoma County is $23 an hour but about three-quarters of the new jobs created between 2014-2024 will pay less than a livable wage.

*Between 2000 and 2016 median rents increased by 25 percent in the county while median renter incomes rose by only 9 percent;

According to the author of the report, Jesus Guzman: “The recovery has left behind a majority of working people in the county and the persistence of class and racial disparities has led to widespread economic insecurity.”